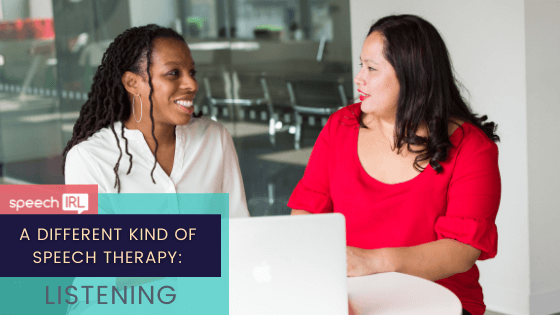 All of the important things I’ve come to know about speech therapy I learned through my clients.

Today’s story is about the therapeutic power of listening.

One of my most impactful client-teachers was a man with a TBI (traumatic brain injury). He was a very successful professional, decorated with awards of recognition in his industry. He had sustained an workplace injury and was diagnosed with a "mild" TBI. One year out, he was still experiencing difficulty with memory, sensory processing, neurogenic stuttering, and attention fatigue. Formerly a confident and accomplished public speaker, he had now developed significant anxiety and shame around even the simplest of communication interactions, like ordering coffee or conversing with friends. Since the accident, he was receiving increasingly negative responses to his communication, even from family and colleagues.

We worked on various strategies and skills in speech therapy, focused on both rehabilitation (building back function) and compensation (trying to work around disabled function). He pushed himself to the utmost in speech therapy, both during our sessions and in the interim days when he practiced on his own.

Still, no matter how hard he worked and how much progress he gained in our sessions, he continued to experience dismissal and criticism when communicating. Strategies are no cure, and many of his listeners demanded perfection, thanks in no small part to his prior success. As one of few people of color in a predominantly white industry, he was no stranger to discrimination. But the addition of disability-- a disability that impacted speaking, listening, remembering, seeing, thinking, and sleeping-- was overwhelming even his lifelong reserves of resiliency.

He spoke about this, week after week. How he would choose to enter a challenging situation, attend a meeting with demanding colleagues, enter a social situation with a group of new people. How he would rehearse strategies, plan what he was going to say, organize his entire day so that his brain would be optimally prepared to perform. He would suppress all the anxiety and speak up in the moment that he had planned.

And he would be cut off, questioned, dismissed by those around him. This would cause his speech to falter and he would forget his words. All that hard work, for what seemed like nothing.

Inside our speech therapy sessions, he would recount these moments eloquently, passionately, and fluently. This is normal. It is acceptable to speak “badly” in speech therapy...and so it is the easiest place to speak “well”. It is safe to forget what you were saying, veer off-topic, stumble. It is also the place where you communicate with the most clarity and crispness.

This can be maddening. My client knew he could communicate and express himself well, in a way that truly showcased his intellect and ability, because he did that every week in my office. But he couldn’t do it out there.

I was struck by the unforgiving demands of his environment. It is incredibly difficult to grow and change when you have to be in survival mode. We spent a lot of time talking about this. He was making significant progress in therapy, but his communication environments prevented him from being able to live out this progress. No amount of “homework” could change this. So we came up with a different plan.

I asked him to identify specific individuals in his life that he trusted and knew to be supportive. His new “homework” was to have a thirty minute phone call with two of these selected friends (with their support and commitment), once a week. There was no assignment of skills or strategies to practice. Just have a conversation, free from the weight of performance standards or criticism. The purpose of this long-term assignment was to practice speaking in supportive, validating, and affirming communication environments outside of speech therapy.

The change was transformational.

Within weeks, his ability to ignore the criticisms of others and maintain his communication confidence improved. On a technical level, his speech and cognitive abilities significantly increased, both inside and outside the therapy room. His word-finding ability and fluency increased, he could narrate more complex stories, he could keep up with faster paces of conversation and remember more of what was said.

His brain was healing itself. But it needed time, space, and the opportunity to push through challenge moments without punishment.

We screened the documentary When I Stutter in my graduate student class several weeks ago. The film features many interviews with people who stutter from all walks of life. There is a moment in the film when interviewees are asked what other people can do to help people who stutter.

There is ONE answer that is repeated by every single speaker. These words play in a short sequence, face by face, voice by voice, but the same word repeated over and over.

Be patient and listen.

Just listen to us.

Ironically, just listening isn’t really an approved speech therapy activity. Most teachers, parents, and insurance companies want to see “doing”. Speech-language pathology students in graduate training are brow-beaten into making sessions as “productive” as possible. To quote my very first clinical supervisor as I headed to my very first session in graduate school: “Sure, you can take ten minutes, but you can’t spend the whole session working on rapport.” Show us the data!

So, in the context of speech therapy, “listening” very often means trying to be a kind person and giving our clients a bit of time to talk about their week before “getting to work”.

And of course, many people DO want to work in speech therapy. That’s why they’re there: to work on their clarity, their fluency, their volume, their eloquence, their confidence. There is lots to do and lots to practice.

But sometimes, the most important thing, the most neurologically beneficial and therapeutically effective thing, is for the clinician to just listen. Not just in a five-minute how-was-your-week exchange. Not just in a structured practice conversation. Just listen for the entire session.

While we’re listening, our clients are speaking. They are fumbling and struggling, having communication struggles they don’t want to experience, which is why they’re in our office.

That’s how learning works. Growth happens when you have space to fumble and grope and try for that thing you know you want, and you have the opportunity to do it over and over and over, without being rushed, without being prodded, with enough space and time to notice what went wrong last time and what you’ll change for the next one.

I always panic when people ask to observe my sessions. Honestly, I think it looks like I, the speech therapist, am doing nothing. My graduate supervisors would fail me if they could see what I was (not) doing.

But speech therapy is not about the speech therapist. Speech therapy is for the speaker, which means the therapist must be the listener. Where else in the world can you find thirty, forty-five, sixty minutes to verbally exercise without fear of interruption, judgment, or failure?

One of my favorite phrases to hear uttered by a client is, “Wow, I just talked for forty-five minutes.” This comes from folks who are used to saying very little in real-world conversations, who often avoid speaking up or keep things as short as possible for fear of expressive failure. They are filled with anxiety if given an instruction to speak for merely five minutes continuously, because of the perceived effort and minefields to be encountered. But magically, in speech therapy, they can speak fluidly and passionately.

I’ll ask them how they feel, after they realize they’ve been monologuing effortlessly for some period of time. They often look surprised. “Uh...good, I think. Yeah, good! I can’t believe I did that! I never thought that was possible for me!”

That is why speech therapy exists. Creating a listening space where speakers get to stretch themselves may look like nothing at all, to an outsider. But it is the most important kind of space, if you’re the one inside.

It is the opposite of nothing. It is everything.

Be patient and listen.

Just listen to us.