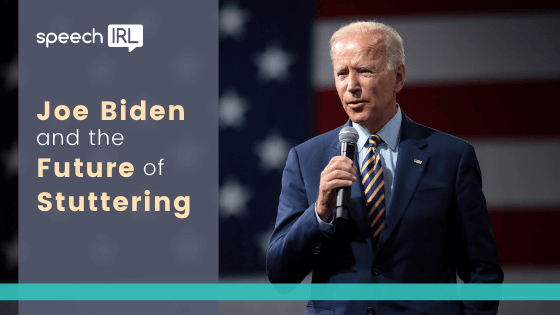 Joe Biden and the Future of Stuttering

One of the most common refrains we hear in our sessions is, “I can’t be an X because I stutter” (or am autistic, or have language difficulties, or any other kind of communication challenge). X is whatever the person most wants to be. Often, it’s a career that involves speaking. Lawyer. Doctor. Teacher. Psychologist. Politician.

Well. It turns out you can stutter and people will still choose you to be the President of the United States.

As much as we’ve been celebrating this step forward in our stuttering-filled world, we’ve also been reflecting and wondering. The Presidential campaign throughout 2020 created new public interest in stuttering, and that is very likely to continue in 2021, perhaps even longer. While increased public awareness is always a good thing, there are complexities of theindividual, unique lived experience that are easily lost when the focus is on one particular person.

What do I think about having a President who stutters in 2021? First, I am excited and hopeful. Second...like stuttering itself, it’s complicated.

Joe Biden Is Not The Every Stutterer

This concern is summed up perfectly in the title of this week’s StutterTalk podcast episode: “Why Can’t You Stutter More Like President Biden?”

A maddening, beautiful, mystical aspect of the stuttering experience is that no two people ever stutter alike. A single individual often experiences different styles and intensities of stuttering over the course of their lifetime. Joe Biden talks openly about times in his life when his stuttering was accompanied by more struggle than it is now. At 77 years old, he is an experienced politician, an experienced public speaker, and an experienced stutterer. The way he speaks today is a culmination of all his experiences and struggles to date. He is an example of perseverance -- not a speech measuring stick for all people who stutter.

Similarly, just like Joe Biden’s speech is his own, his story is his own. For years, the President-Elect has shared the story of how he practiced reading poetry aloud to help himself speak more easily. He discovered his own path...but others may require a different path.

In just the past few weeks, I’ve noted a surge of social media comments and questions from parents who say that they are having their stuttering child start to read poetry aloud at home, and “helpfully” suggest this method to others asking for advice.

Societal attitudes around what it means to be “different” have shifted dramatically in America over the past fifty years. I recall a patient I met in my first year of speech pathology practice, when I worked in a nursing home. I saw her for a swallowing evaluation, and noted that she stuttered. She was in her early eighties. She told me that when she was a young girl growing up in the rural midwest, she wasn’t allowed to attend school because she stuttered. Her speech pattern was assumed to be due to cognitive impairment -- “They thought I was an idiot” -- that rendered her incapable of participating in academics. She fought her way to an education nonetheless and was now retired from a very accomplished career in nursing. (She made it quite clear that she had no interest in speech therapy for stuttering, which was a relief to me, as she clearly would have run circles around me in any speech-related activity, disfluencies and all.)

Stuttering, like so many other disabilities, has a long history of being stigmatized. FDR, another President with a disability, went to great pains to minimize the appearance of disability in public.

While disability has historically been reason for shame, overcoming one’s disability is something to be celebrated. Overcoming involves hard work, commitment, discipline, perseverance, and determination, qualities that are admired.

Joe Biden frequently talks about “overcoming” his stuttering. This language highlights his life experiences, collected during a certain era. It’s a story told by other famous stutterers of his generation, like Captain Sullenberger (“Sully”). It’s a narrative that inspires many people I know who stutter, particularly those who skew a little bit older.

For younger generations, though, societal values and concepts around disability are very different. Overcome can be a loaded and controversial term to use in reference to stuttering. This Medium article by the NYC Stutters team eloquently describes the nuance of this narrative, and its significance for a younger generation that stutters.

In 2021, it remains to be seen how the President’s personal narrative of “overcoming stuttering” is interpreted, both by PWS young and old, and the general public. There is so much that we can learn from Joe Biden’s struggles, and he shares openly to support, encourage, and inspire. But his past struggles are not the same ones faced by today’s youth, and we must be vigilant about letting each child, teen, and young adult create their own narrative.

My last reflection is hope. I hope that maybe, just maybe, having a POTUS Who Stutters will be a catalyst toward stuttering being big deal, at all.

I grew up in Canada during the 1990s, when Jean Chretien was the Prime Minister. He had Bell’s palsy as a young man, which caused half of his face to become permanently paralyzed. It affected his speech and his appearance. I vaguely remember my parents explaining that the new Prime Minister had something called “Bell’s palsy” and that’s why he looked and sounded the way he did. He was the Prime Minister for ten years, and I just thought that Bell’s palsy was a thing some people had, like freckles.

Whether President Joe Biden stutters openly, or simply continues to highlight others who showcase confident stuttering like 13-year-old Brayden Harrington, I hope that stuttering is regularly seen on the news. I hope it’s seen in press conferences, in speeches, at parties, in conversations about controversial and mundane issues, about the environment and health care and pop culture and sports. I hope that people get used to seeing, hearing, and waiting for stuttering. I hope that when my friends introduce themselves, and struggle with a few moments of silence before their name comes out, people don’t react with confusion or alarm or a snicker.

I hope that the response to stuttering in 2021 will be matter-of-fact, patient silence, and understanding that some people just stutter. Just like President Joe Biden.