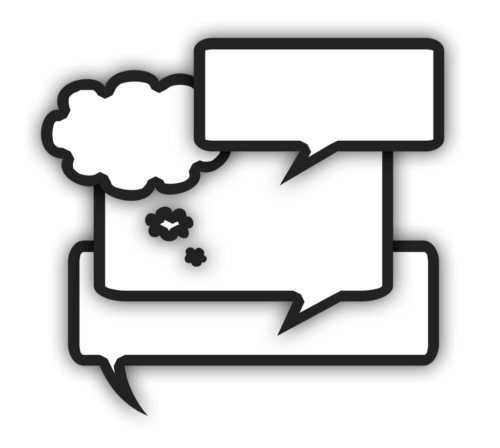 How Does Stuttering Really Work?

An episode of the podcast, "Stuff You Should Know", called “How Stuttering Works”, recently hit the airwaves. “Stuff You Should Know” (SYSK) is a popular podcast and video series published by the How Stuff Works website, with the tag line "Learn how everything works!" The show discusses a wide variety of topics and disorders, both common and unusual. This episode focused on stuttering.

Hosts Josh Clark and Chuck Bryant discussed several well-researched aspects of stuttering. While many claims were articulated accurately, others seemed to be alarmingly misinterpreted.

“Disfluency. I think that’s actually the clinical name for what we call stuttering or stammering depending on where you are.”

“Stuttering/Stammering/Disfluency is an interrupted flow of speech.”

“Disfluency is a normal part of communication if it occurs less than 10% of the time.”

On the surface, it appears that stuttering is just a more exaggerated form of disfluency. “Normal” disfluencies may include repetitions, prolongations, unfilled pauses (thinking time), filled pauses (ums, uhs), and revisions. Disfluencies associated with stuttering may include repetitions (of sounds, words, or phrases), prolongations (of sounds), fillers (ums, uhs, you knows) often used to help get the word out, and blocks. Blocking is unique to stuttering and will likely not be present in normally fluent individuals. A block occurs when speech is completely stopped or “stuck” with little or no sound present. During a block, you will often see tension or struggle.

Whereas the fluency breaks in normally fluent individuals reflect difficulty formulating the content of the message (and are often found at phrase or sentence boundaries), disfluenices in individuals who stutter may often be found
within
the word and may be characterized by excessive duration and tension.1
Another characteristic that distinguishes normal disfluency from stuttering is loss of control. This has been thought to make stuttering categorically different from typical disfluencies.2
The individual knows exactly what he/she wants to say but simply can't get the word out.

Think of it in terms of an iceberg, an analogy we often use when talking about stuttering. When we talk about icebergs, we usually think about the Titanic. The part that the titanic saw was the tip, and it looked pretty harmless – a small iceberg so gently peeking out of the water. Why did the boat sink? It sunk, not because of the tip, the physical disfluencies, but because of what was underneath, the thoughts and feelings. The bottom is the most detrimental to the boat. Years of formulation, consolidation, and freezing shake and break the boat. We can melt the tip, but it’s just going to come back. 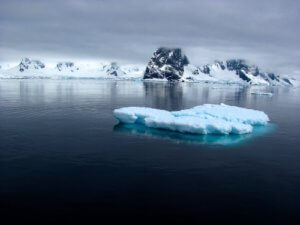 “When it starts to qualify as stuttering, it’s really noticeable, it has an interrupting effect typically on the conversation or the communication that’s meant to be going on. That’s on the far end of the spectrum. On the other side of the spectrum, just about everybody engages in disfluent speech.”

There are some cases where the disfluent speech itself constitutes only a small part of the speaker’s overall experience of stuttering.3 People who stutter covertly, or pass as fluent, may exhibit little to no physical disfluency.4, 5 They may avoid certain situations or words in order to appear fluent. In this case, you will not see an interrupting effect on conversation. You may not see any disfluencies at all. In terms of the stuttering iceberg, a person who stutters covertly may not have any tip of the iceberg visible, but a whole lot underneath.

Pamela Mertz, in The Mighty, gives a nice account of what it's like passing as fluent. She says, “It was like mental gymnastics, constantly being on the lookout for a potential stuttering moment and thwarting it with one of my many tricks. It was exhausting to live like this.”

To define stuttering simply as an “interrupted flow of speech” seems too simplistic. Jackson, Quesal, and Yaruss (2012), propose this definition of stuttering:

“Stuttering is a neurobiological lack of integration of the underlying processes of planning and producing language and speech that, upon verbal execution, can lead to interruptions in the acoustic speech signal (e.g., blocks, part-word repetitions, disfluencies) and physical struggle (e.g., tension). These surface behaviors may not be present, however, when the speaker exhibits communicative avoidance (e.g., circumlocutions, fillers). The underlying features may lead to surface behaviors, as well as emotional and cognitive reactions. Depending on the individual, these may result in significant difficulties in communication and an adverse impact on the speaker's quality of life. The physical symptoms, emotional and cognitive reactions, and impact on the speaker's life all comprise the disorder of stuttering.”

“One of the things that’s attendant with these different stages of development of a stutter are emotional problems or symptoms like co-morbid symptoms along with the stutter like blinking, pursing your lips when you're frustrated, angry, or anxious in conjunction with stuttering.”

It sounds like Josh and Chuck are referring to secondaries. Secondaries are behaviors that a person who stutters might engage in to help get the word out. This may include stomping your foot, blinking your eyes, flaring your nostrils, or anything that may have once helped you get the word out so you continue doing it. These are learned behaviors as a result of stuttering that often develop and change over time.

“People who stutter do not necessarily stutter in the same frequency throughout their day. There are definitely situations that are going to make the stutter way more pronounced that are associated with high anxiety situations.”

“It can vary a lot within a conversation.”

There are factors that tend to make stuttering increase: high anxiety situations, stress, high cognitive or language load, fatigue, etc. This does not mean that these factors cause stuttering. This is different from a person with normal disfluencies in their speech, where anxiety provoking situations may indeed cause the disfluency.

Stuttering can also vary within a conversation and across words. Introductions are often difficult for people who stutter (name, where you’re from, occupation, etc.) but you may notice that the person who stutters is not stuttering as much during a shift to a more informal conversation. This variability is puzzling, but it is the norm, rather than the exception.

“The whole thing about stuttering is not that it’s a disorder or a disease or the sign of an unintelligent person or that the person can’t think of what they mean to say, it’s absolutely none of those things. It’s strictly an interruption in what we would consider normal communication and so attention is drawn to it and it turns out that that just makes the problem worse and worse. So it turns into this vicious cycle. But that’s all it is. That’s really it.” … All it is is just interrupted communication between two people. … It’s strictly when they’re speaking and communicating with other people.” 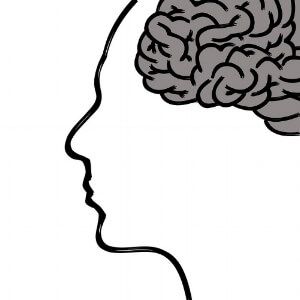 We now know that stuttering is more than just a speech motor disorder. There are structural and functional differences between the brains of people who stutter and people who do not stutter.6 We are converging on a multifactorial model in which normal cognitive, motor, and linguistic systems become weakened and vulnerable when they interact.7

We also know that drawing attention to stuttering does not make the problem worse. This diagnosogenic theory8, popular in the 1940’s and 50’s, stated that it is the parent’s reactions to their child’s stuttering that causes fluency failure and anxiety. There are actually little differences between parents of children who stutter and parents of children who do not stutter.9

Adult stuttering is often qualitatively different from the speech of children who stutter. However, to say that the stuttering gets “locked in” and “solidified” is simply not true. We know from neural research that anatomy is not destiny. Brains of people who stutter, after one year of treatment, start to look like the brains of people who do not stutter.10 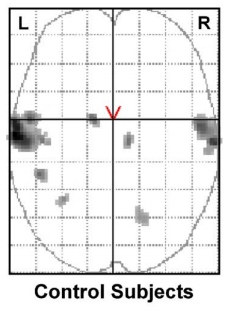 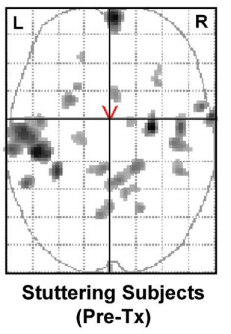 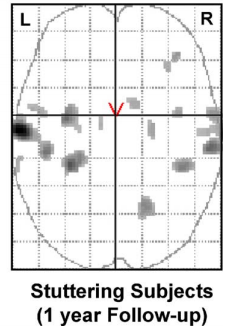 Stuttering treatment may look and sound like an AA meeting. Step 1: acknowledging that you are a person who stutters. In avoidance reduction terms – taking on the role of a person who stutters. Paradoxically, greater acceptance often leads to increased fluency. But this is really hard to do, and for many clients, there are many steps preceeding it.

Charles Van Riper, one of the founders of the field of speech-language pathology, once said, “Stuttering is everything you do to try not to stutter.” Often, hiding from your identify as a person who stutters perpetuates the bottom of the iceberg: the thoughts and feelings associated with stuttering. The effort to be fluent is what paradoxically leads to stuttering, creating an approach/avoidance conflict,11 between whether to speak or not speak (avoid stuttering).

You can find first-hand accounts of the power of self-help for stuttering in this written account by Emma Alpern and this powerful video produced by the NYC chapters of the National Stuttering Association.

“One percent of adults in the world stutter.”

“About 5% of children stutter and about 75% of the time they will lose that disfluence as they grow older.”

Researchers observe a much higher prevalence rate among children than adults. Prevalence under age 6 is much higher than in other ages, as much as 2.6%.18 This means that many children stop stuttering either because of natural recovery or with treatment.

Because incidence for stuttering is about 8% (meaning 8% of children at some time are diagnosed with stuttering), recovery rates may actually be as high as 91%. This is still an ongoing research topic, and researchers are not entirely sure of an exact number.

“Among monozygotic twins if one twin stutters there’s a 90% chance that the other one stutters as well. But for dyzogotic twins there’s only a 20% chance. So there’s clearly a genetic basis to stuttering.”

Research shows that in monozygotic twins, there’s a 57% chance that if one twin stutters the other stutters, whereas there is a 31% chance for dyzygotic pairs.18

Mutations in another gene, GNPTAB, have also been associated with stuttering.20 Mice with this mutant copy of the GNPTAB gene had less frequent vocalizations and more long pauses than normal mice. 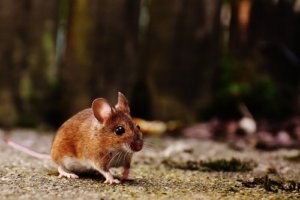 “There’s something in your brain with dopamine transmission where you have too much of it so you’re having trouble getting the thoughts into your head into the movements that it takes to create speech."

Increased dopamine levels have been associated with stuttering. Drugs such as Pagoclone can block dopamine and increase fluency. Pagoclone has been found to cause around a 20% reduction in percentage of syllables stuttered.21 Pagoclone, however, is not yet approved for stuttering and there are often severe side effects.

So how does stuttering work? The short answer - we really aren't sure yet. Stuttering is messy, complicated, and paradoxical.