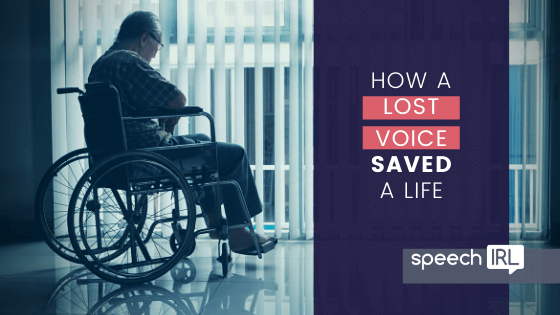 How A Lost Voice Saved A Life

I’ve worked with speech therapy clients in all sorts of unique situations over the years. It’s always sad to see them go, but very rewarding to see the change in them once they have achieved their goals. Each client takes a different path through the different areas we cover in speech therapy: naming their goals, learning about the speech apparatus and communication techniques they’ll be using, practicing exercises and working on other activities, etc. But a few clients will always stand out in my mind, such as this one from my first year of practice. Mr. James (name changed) was staying at a skilled nursing facility. The first time I visited him was quite awkward.

“Katie, can you screen Mr. James in room 103 for speech? He’s kind of hard to understand.”

“Sure thing,” I told my physical therapist colleague. I added Mr. James to my list and stopped in to see him that afternoon. Like many of our patients, he was a respectable-looking gentleman in his late seventies.

I introduced myself and asked how he was doing. I was embarrassed to be in the room as soon as he started speaking. I excused myself after a few minutes of polite chit-chat. I followed up with my coworker and told her that he was perfectly fine, speech-wise.

A British accent, alas, does not qualify one for speech therapy.

Mr. James did not make it onto my caseload, but I learned a little bit about him through the other staff. He preferred to stay in his room, avoiding the communal dining room and social interaction in general. He was quiet and appeared to be depressed.

Mr. James’ story was heartbreaking. He had end stage cancer, and a terminal prognosis. He had a wife and two adult children. One of his children was killed a few years ago in a car accident. The other had died only months ago, from lung cancer. Mr. James and his wife had buried both of their children, and now he was dying from the same cancer that had taken the life of his son.

As the weeks wore on, I heard his therapists express frustration. He was increasingly resistant to exercising, which made their jobs more difficult. His demeanor had changed from quiet to sullen. He never left his room, and avoided interacting with anyone. He seemed to be giving up.

After the initial mis-referral for dialectal diversity, I was surprised when his physical therapist sought me out again. The request was more urgent this time.

“Katie! You need to see Mr. James right away! He can’t talk!”

“What happened? Did he have a stroke?”

“No, nothing happened. He just can’t talk all of a sudden.”

It is common for patients to have sudden changes in communication ability, but such a drastic difference is usually the result of some major medical event. People don’t lose the ability to talk for no apparent reason. I figured this was my physical therapist colleague being dramatic and not understanding how speech works.

“He can’t talk! At all! I don’t know what happened, but you need to go see him!”

This still made no medical sense, but we were clearly out of the PT’s depth to provide clinical speech pathology observations, so I promised I would go see him straight away.

His nurse was standing outside his room when I approached. “Hey Anna, I heard that Mr. James—”

She immediately stopped what she was doing and turned around. “Oh! Thank goodness you’re here! He can’t talk!” she exclaimed breathlessly.

OK, there’s a pattern here… “Yeah, that’s what I was told. Did anything happen? And when you say ‘can’t talk,’ can you explain what he sounds like?”

Huh. Well, this should be interesting.

A Closer Look at the Problem

I knocked on the door and entered Mr. James’ room. He was slouched in his wheelchair, shoulders sagging, listless. The curtains were drawn, casting the room in a dingy light even though the sun was shining. He looked as sullen and still as ever. “Hi Mr. James, we met a few weeks ago. I’m the speech therapist—”

As soon as I said these words, Mr. James sat bolt upright. He frantically beckoned me over with his hand, eyes wide.

“I understand you’re having trouble speaking.”

He nodded vigorously, locked onto me with an earnest gaze.

“What happens when you try to talk?”

He opened and closed his mouth silently, eyes still wide, pantomiming his hands to and from his mouth to demonstrate that no sound was coming out. His gestures were dramatic. He was clearly alarmed and distressed.

“So you can’t make any sound at all?”

He shook his head fervently, then looked at me expectantly.

He opened his mouth to say aah. Nothing. He waved his arms as if to say, See! This is what’s happening!

“And this just happened suddenly?”

I ran through a short battery of tasks to evaluate his speech and vocal mechanism. His strength, movement, and flexibility were perfectly normal. His ability to swallow was normal. There were no significant, or even insignificant, changes in his medical status. There was no physical reason why Mr. James was not able to speak.

For a patient who had been disengaged and stubbornly apathetic for several weeks, Mr. James seemed extremely eager to hear my assessment and suggestions for how to rectify his sudden mystery syndrome. I felt his eyes on me as I gazed at my “within normal limits” notes and weighed what exactly I would say to him. Well? he seemed to be asking.

“I’m not exactly sure why this happened to you,” I said finally. “But we’ll start small and try to build you back up. Right now it seems like you can’t make any sound, but you can breathe fine. Speaking starts with breathing, so we can work with that. Can you breathe out loud through your mouth, like this?” I made a quiet hhh sound, whisper-like. Since he believed he couldn’t speak, I had to think of something sufficiently non-speech-like, to see if it could “trick” him into being able to perform.

He furrowed his brow and sat up straight, focusing all of his effort into making this breath. “Hhhh” came out just fine.

“Great!” I said enthusiastically. “We can use this.” He seemed encouraged. I stayed with him for another half-hour, practicing audible exhales and whispery h-sounds. He was focused, strong, driven for the entire session.

I promised to come back tomorrow, and instructed him to keep practicing. I said these exercises would help him get stronger so that we can build up to full sound. This wasn’t true (or rather, it was unnecessary, since he was physically capable already), but it seemed to comfort and encourage him greatly.

“How is he?” asked Anna concernedly as soon as I exited the room.

I didn’t want to tell her that the problem was in his mind, not his body. It didn’t feel right or respectful. “I think we found a starting place. I gave him some exercises to practice and will see him every day this week.”

She seemed relieved. “Oh good! He was so upset this morning.”

On my way home from work, it occurred to me that they did not teach us how to handle this situation in graduate school.

On my second day with Mr. James, he was able to utter short syllables in a whispered voice. I made sure to give him plenty of exercises to practice after I left. On the third day, he could say a quiet “ah” with real sound. By the fifth day, he was reading short paragraphs aloud. By the end of a week, speech therapy consisted of having a full conversation for forty-five minutes. The exercises from the week were scattered about his room, crumpled and torn, evidence of how devotedly he was practicing his speech exercises over the course of just a few days.

When I told Mr. James that he was ready to be discharged because he was doing so well, he looked worried. “What if I lose my voice again?” he asked. I said I could keep him on my caseload for one more week, to “make sure your voice strength is steady.” He seemed happy about that. I told him that he should practice having conversations with other people too, to help improve his speaking strength.

Having rediscovered the ability to speak, Mr. James became a new person. He was out of his room as much as possible, laughing with the nurses at their stations, introducing himself to new patients in the dining room, and even striking up new friendships. We held our speech therapy sessions on the patio with his wife, or at lunchtime with a new group of tablemates, to practice “loud speaking” in livelier environments.

In our second-to-last speech therapy session, Mr. James reflected on his experience. “You know, I really didn’t appreciate how important it is to be able to communicate, until it was gone. It makes all the difference in the world. Now that I can speak again, I want to do everything I can make sure I don’t lose my voice again.” I assured him that if he continued to talk and communicate proactively like he had for the past week, he would not have to worry about losing his voice again.

Mr. James was with us for a few more weeks before being sent home. He suddenly became interested in exercising, and charmed his therapists with conversation. He became such a positive social force in the facility that the entire staff was sad to see him go. I remember him leaving, waving to everyone, a big smile on his face.

My colleagues heaped praise upon me for Mr. James’ miraculous recovery. Medically speaking, it is unheard of for a patient to go from completely mute to eloquently conversational in the course of seven days. I felt awkward accepting their admiration.

I never told a soul that Mr. James was physically capable of speech the entire time. His pain and sadness were real. Illnesses in the mind are stigmatized far more than illnesses of the body, and I didn’t want Mr. James to be known as the sad patient who couldn’t speak because it was “all in his head.” He worked hard to regain his speech, and was encouraged along the way by compassion and support from everyone around him.

Mr. James never really lost his voice. He had simply given it up along with all the other parts of life. It wasn’t until he “misplaced” his voice that he discovered how much meaning life still had, and how much he wanted to be a part of it. Speaking. Laughing. Interacting. Communicating. Connecting.

I don’t know what happened to Mr. James after he left our facility. It is likely that he passed away not too long afterwards.

Of all the people I’ve worked with over the years, Mr. James is one I’ll always remember. The dying man, who had lost so much, and was ready to give up what little he had left…except for the ability to communicate. He had to lose his voice to find his life.

Communicating…it makes all the difference in the world.