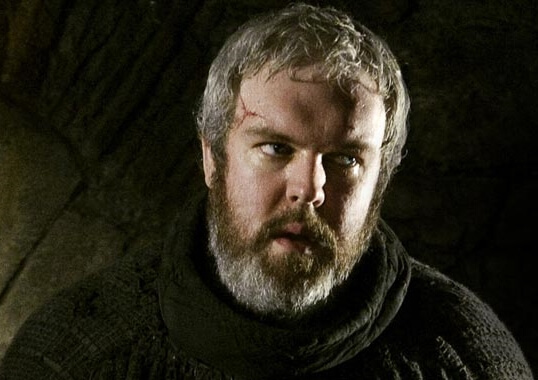 Hodor Does Not Have Aphasia

Don't get me wrong, I love it when speech pathology topics make mainstream pop culture news. Many communication disorders are unknown and/or are poorly understood in the general populace, so it's great to get a conversation going.

However, when those conversations serve to perpetuate misinformation and stigma, that ain't gonna fly.

In anticipation of last night's premiere of HBO's Game of Thrones Season 5, Business Insider published an article about the ubiquitous and beloved character Hodor: "This is the actual condition that makes 'Game of Thrones' Hodor 'hodor'" (the URL provides a more specific diagnosis, which is expressive aphasia).

Now, as the author continues to describe and explain some background on aphasia, the information is pretty solid. From this point of view, this correlation is a fun, relevant way to pique the public's interest and educate them about a communication disorder that affects approximately 1 million Americans. Unfortunately, Hodor is anything but a "textbook example" of aphasia, and it is incredibly damaging for real people living with aphasia to have this gentle giant become their poster boy.

The actual textbook definition of aphasia

The American Speech-Language-Hearing Association (ASHA), the certifying body for speech-language pathologists in the United States and leader in communication science research, defines aphasia as follows (click here for full article):

Aphasia can take many different forms, and SLPs have a variety of terms to identify and describe the various types and symptoms. Expressive, receptive, non-fluent, fluent, the list goes on. Like all disorders, it can present on a wide spectrum of severity. It may be so mild that nobody except the speaker is aware of it, or it may be so severe that the individual is totally unable to communicate. Expressive aphasia refers to difficulty saying an intended message, versus receptive aphasia which refers to difficulty understanding things said by others.

A very important item to note about aphasia is that it is acquired. This term refers to disorders where the system was previously functioning normally, and then something happened (a stroke, brain injury, etc.) to cause a loss of function. Acquired disorders are distinct in cause from developmental disorders, which are underlying lifelong issues with no identifiable source (autism or developmental delay).

In very severe cases of expressive aphasia, the speaker may only be able to say one or two words ("hodor hodor", you might surmise). This is an excellent example of a real person with severe expressive aphasia:

Finally, perhaps the most critical point to note from the definition of aphasia is that it does not affect intelligence. If you have an IQ of 180 and acquire severe expressive aphasia, your IQ will still be 180 (assuming no other brain damage occurs, of course). This is why aphasia can be so devastating: your mind, your ability to think, reason, ponder, feel, experience, is still completely intact...but you can't communicate that to those around you.

A little more about Hodor

Hodor is portrayed in both the books and movies as being significantly cognitively impaired. He is generally able to follow basic instructions that are given to him, but his actions and reactions are typically those of a toddler or young child (in one instance, Hodor cries and cowers because he is afraid of a thunderstorm, while the 11-year-old Bran tries unsuccessfully to calm him down). He is not self-sufficient and has poor adaptive social skills, needing reminders for things like remembering to wear clothes. GRRM uses the adjective "simpleminded" to describe the beloved half-giant.

As evident from the only real biography of Hodor, as told by Old Nan, "hodor" is the "only word that he ever had." Old Nan's story indicates that Hodor was linguistically impaired from the time he first started talking. Reading between the lines, her reference to "when he started saying it" implies that he started saying things rather later than most children, so this "hodor" was significant both in occurrence and form.

The DSM-V defines DD/IDD as follows:

Hodor always hodor'd, he was not dropped on his head. There was something unusual about him as a young child, which became more evident as he aged physically but not cognitively or socially.

This "Hodor compilation" gives an idea of Hodor's personality and linguistics. Does he seem equivalent to the previous gentleman, to you?

Why this whole thing matters

Communication disorders can present in subtle but heartbreaking ways, and aphasia is no exception. Communication is separate from cognition, but if you can't verbally explain to people what you know, your intellect is nonexistent. Uninformed listeners are quick to assume that you are stupid, foolish, or ignorant if you can't communicate in a "normal" fashion. If you can't say it, you don't know it.

This is why it is so dangerous to blithely Wikipedia-diagnose Hodor with aphasia. Hodor does have a communication disorder, but it is vastly different in cause and effect than true, pure aphasia. (Cognitive brain damage can certainly co-occur with aphasia in cases of neurologic trauma or dementia, but they are two separate diagnoses.)

If someone who had never heard of aphasia was to take the original article at face value, it would be reasonable for them to assume that people with aphasia have the intellectual ability of a 3-year-old. It's difficult enough to be suddenly robbed of your eloquence as an adult, and now everyone assumes you have an IQ of 50, to boot? "Just like that guy on Game of Thrones!"

One of my first-ever aphasia clients was a fantastic older lady who could not tell you the words for dog, sun, or boy if her life depended on it. I will never forget what she said during one of our therapy exercises. I showed her a pen, and asked her to tell me the word. She knew exactly what it was, what it was for, picked it up and started using it...she used to be a journalist, after all. Still, she could not say the word "pen". After staring at it, touching it, and trying fruitlessly to get that part of her brain to function, she gave up. "I know what I know," she exclaimed, "I just can't say it."

A brilliant, insightful pearl from someone who can't say "pen".